The Menagerie were back in Avernus, and though they spent a few hours in the Feywild, it seemed like no time had passed for Baator. Three erinyes closed in on the group and alighted upon the Anti-Chrysler, ready to fight, and demanding that they explain their presence at Bel’s Forge and their involvement in the skirmish. For a moment, the group attempted to negotiate by deed alone, trying to convince the devils that they should be trusted because of the handful of demons they had slain as they punched through the skirmish line. When this tactic didn’t seem to impress the erinyes, Horns handed over the letter of introduction that they group had received from Ralzala the dao. One of the erinyes broke the seal on the document and read it through, and then the three devils escorted the group to a great iron gatehouse (complete with portcullis) that led into the volcano. 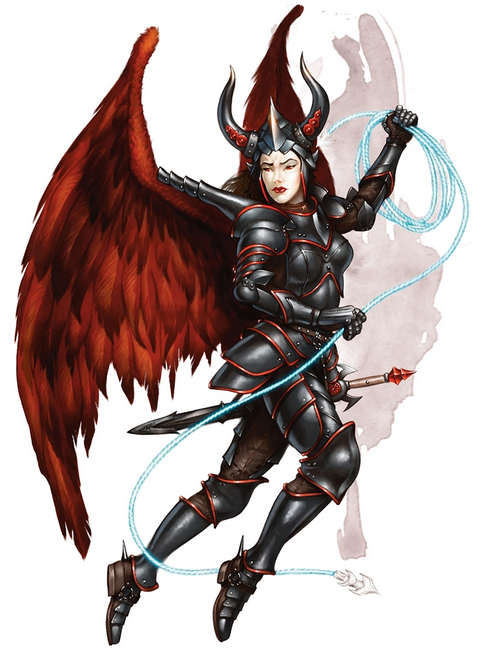 Outside this gate, the group realized that they were weary and beat up from a string of battles, and the erinyes were willing to afford them the opportunity to rest a short while before they requested their audience with Bel. After catching a breather for an hour, they were ready to enter the Forge. The group had to leave the Anti-Chrysler outside, and two of the three erinyes stayed behind to guard the machine, while the third escorted the party into the volcano.

They passed through a series of large, winding halls and stairways, voluminous to allow the passage of creatures several times larger than the Menagerie. The temperature here was dangerously high, and several of the party knew that they were ill-suited to remain inside the Forge for very long; Horns felt comfortable, however. The majority of the chambers and apartments within the volcano were outfitted to serve as barracks for the infernal garrison stationed at the Forge, and a couple members of the Menagerie were able to keep a mental map of the route they took so they could find their way back out unaccompanied if necessary.

After perhaps half an hour of travel the group descended down a large iron-and-stone spiral staircase into the heart of Bel’s Forge - a massive, vaulted chamber which featured four giant-sized anvils and smithing stations, racks of too-large weaponry, an incomprehensible machine suspended from thick black chains above one of several gaping expanses of lava, and a huge floating throne made of dark grey bones.

The erinyes waited patiently until the throne - and its occupant, an imposing red devil with gold-capped horns, a long scaly tail, two great leathery wings, burning eyes, and a rictus of a grin flashing wickedly pointed teeth - turned to face her and the group. The erinyes briefly explained the group’s presence and held out the letter of introduction. Bel crooked a finger, and the letter lifted itself from the erinyes' hand and drifted lazily to unfurl itself in front of him. He nodded, dismissed the erinyes, and spoke to the party. 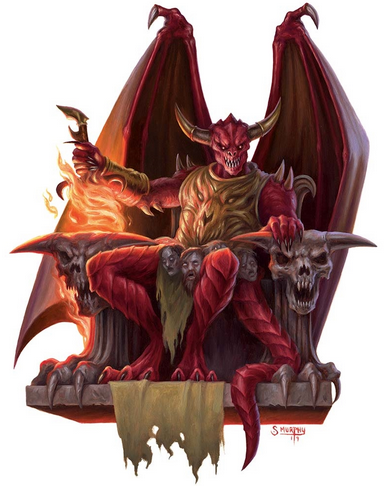 “You have been granted an audience as per your letter, but that’s as far as it will get you. What business have you here?"

As might be expected, the Menagerie spent some time in getting around to the heart of the matter, and several minutes were spent in inconsequential conversation during which Bel mentioned some of the broad strokes of what goes on in his Forge: mainly that he and his giants produce specialized weaponry for elite members of the infernal host, leaving the mass-production of hellish arms to the second layer of the Nine Hells, Dis, and its ruling archdevil Dispater. Eventually the group mentioned that they were trying to retrieve the ring of Zariel, and Bel inquired as to the nature of their employment under Zariel. The Menagerie communicated that they were a third party uninvolved in the Blood War in specific and the hierarchy of the Nine Hells in general.

At this point, the conversation split into two parts. Bel continued to talk with the group vocally about the Blood War and public-knowledge information about the ways in which he and his forge support Zariel and her war effort. Simultaneously, he opened a telepathic line to the group, stating first that the contents of this telepathic communique shall be kept secret on pain of death.

In the telepathy, Bel prompted the group for what they wanted from him, and he waited in mild amusement while the group scrambled to present a unified request, chuckling about how normally beings who come to treat with him have their ask already worked out ahead of time. The Menagerie deliberated and eventually concluded that their request was for Bel to provide them with transportation to and from Phlegethos, thus dropping the quest for the ring of Zariel and their arrangement with Mad Maggie. In exchange, Bel offered them the task of retrieving nine adamantine rods which he mentioned had been stolen from him by some of Zariel’s spies.

After a few moments' consideration, the party agreed to the exchange. Bel beckoned an oversized greatsword to drift over from a nearby weapon rack to rest in his hand, and he descended upon the group. Publicly, he invited them to look closely at the weapon and observe the fine craftsmanship; when observed close-up, the length of the blade became faintly emblazoned with glowing orange runes that listed the details of the contract he was offering them. The party took some time to negotiate improved language and terms, making sure to close certain loopholes and include certain provisions: that neither Bel nor his agents would kill, maim, wound, or otherwise injure the party while upholding Bel’s part of the contract; that their transportation from Avernus to Phlegethos would not depart until they were ready; and that their return trip from Phlegethos to Avernus would be on their own schedule and would not depart without them. For Bel’s part, the important language to take note of was as such: that all nine of the adamantine rods must be delivered by the party to Bel here in his forge before he would enact any part of his contractual obligations; that should the party’s efforts be discovered, Bel would completely disavow his involvement with and knowledge of the plot; and that Bel would take no action on the party’s behalf if such action had even the smallest possibility of being interpreted as treasonous against Zariel.

When the terms had been modified to both parties' satisfaction, Bel instructed the Menagerie to touch the edge of the blade and thus sign the contract. As each party member did so, a razor-fine cut was made in their flesh and a small amount of their blood was absorbed into the blade. Then, beneath the terms of the contract, that person’s signature appeared in the form of their deepest, most solid conception of their own self. Horns' signature showed up as an incomprehensible scribble, a reflection on his muddled identity; Grey actively resisted the blade and was able to force his signature to show as “Grey” and not “Hael”.

The contract signed, Bel told the party the details of their retrieval operation; he did not know the location of the nine adamantine rods, but he knew of a creature that supposedly did. Then, with a dismissive wave of his hand, the Menagerie found themselves suddenly standing back outside of the volcano, next to their infernal warmachine and the three attendant erinyes. Furthermore, an imp popped into view atop the Anti-Chrysler, introduced himself as Balakros, and told the group that he was to guide them to the sibriex under Bel’s orders. The erinyes escorted the vehicle back to the lines of skirmish and instructed the legions to punch open a hole to let the group through. The infernal troops did as they were ordered, and Bel’s Forge soon disappeared behind the Anti-Chrysler as Balakros directed Val at the helm.

A couple of hours later, the Menagerie found themselves approaching a two-story black iron scaffolding nestled in the middle of nowhere. Between the scaffolding and the blasted ground writhed a grotesque, twisted mass of flesh, occupying some fifteen-by-fifteen-by-fifteen foot volume. No sane geometry could predict the arrangement of bloodshot eyes and gaping mouths upon the bulbous body, and it oozed blood and pus and vile ichor in a large puddle spread beneath it. It was held fast by half a dozen thick, barbed chains, anchored at various points into the ground and upon the scaffolding. On a platform halfway up the scaffolding sat a robed jackal-like figure, shouting through a hand cone at the disgusting creature. Two chain devils were positioned at the top of the structure, taking obvious delight in torturing the nightmare by hauling upon the spiked chains. 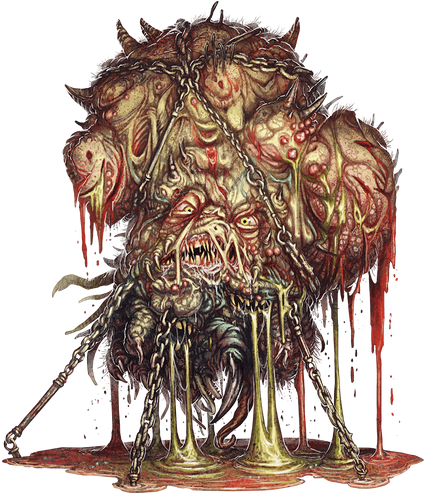 Balakros identified the quivering mass as the sibriex, from which the party was intended to extract the location of the rods, and then flew ahead to the jackal fiend to announce the group’s presence and prevent the devils from attacking them.