The imp Balakros conjured a small chair and lounged upon the middle platform near the jackal-fiend, and the Menagerie approached the tortuous structure. OneShoe, being in the lead, slowed in her advance as the voice of the sibriex - somehow both simpering and gutteral - slipped into her mind. Through telepathy it praised and lauded her, and beseeched her to free it. OneShoe replied through the telepathy that she and her friends were here for information, and when the sibriex asked her to indicate who her friends were so it could open up a telepathic party line between them all, OneShoe gestured to all of the Menagerie except for Horns.

Meanwhile, Horns (flying) and Val (climbing) made their way to the platform halfway up the scaffolding. Upon closer inspection, the jackal-fiend could be seen wearing a spellbook bound in chasme flesh at his waist, and could be heard addressing the sibriex in a very slow, simplistic manner, as if he were addressing a particularly unintelligent child. Horns and Val told the jackal-fiend (which Horns managed to identify as an arcanaloth) that they were to extract some information from the sibriex under the orders of Bel, and the arcanaloth offered them a couple of soul coins if they could make the being talk. 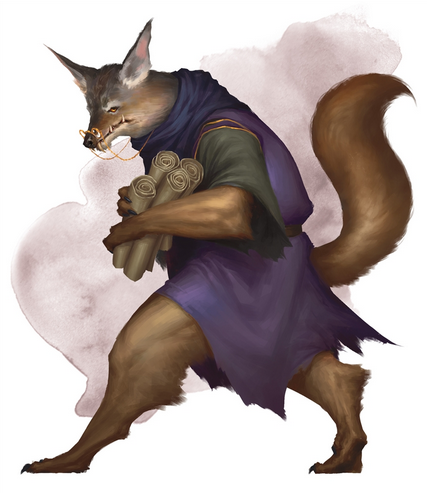 While the rest of the group were drawn into the telepathy, Horns engaged the arcanaloth in conversation. Apparently in recent months, the demon had grown more and more recalcitrant, and it was an increasingly arduous ordeal to convince it to part with even the smallest scrap of information.

On the party line, Val asked if the sibriex knew the location of the adamantine rods stolen from Bel by Zariel’s spies. The creature confirmed that it did, and told her that if they freed it from its captors it would reveal that information.

So Val cast thunderwave on the arcanaloth and sent it careening off the platform, to the surprise of literally every creature present.

One of the chain devils assaulted Val with its chains, wrapping her up in the heavy links of barbed iron. OneShoe fired up at it with her shortbow, taking cover behind the sibriex, and Horns flew up to engage it in melee combat. Val wriggled herself free of the chains and scurried into the framework of the scaffolding to try and make use of whatever cover it could provide.

By then the arcanaloth had picked itself back up from the ground. It rose into the air, cursed Balakros as a traitor and a liar, and hurled a bolt of chain lightning at the imp. Balakros was instantly vaporized in a puff of brimstone and the spell jumped to several nearby targets, sending a torrent of lightning through Val, Horns, and Grey. Flames danced in Horns' eyes as he retaliated with a hellish rebuke, but learned that arcanaloths tend to be somewhat resistant against fire.

Grey shifted reflexively into his hybrid form and laid a blood curse of binding upon the arcanaloth; spectral wolves bounded through the air to clamp jaws upon the fiend, holding it in place. Horns fell victim to the entangling chains of the other chain devil and found himself dangling below the fiend with his wings crushed against his body. OneShoe sent another arrow soaring through the air, this time to embed itself in the arcanaloth, and the sibriex sent out a telepathic plea for the group to focus on freeing it.

Val leapt out from the structure at the arcanaloth and cast blight upon it at the apex of her jump. She was satisfied to see its features grow gaunt as the spell withered away some of its being, and wild shaped into a giant eagle before she hit the ground. Horns, despite being ensnared in iron links, was able to catch the chain devils in another thunderwave and blasted his captor off the scaffolding; the hooked chains were torn out of his body, and the tiefling unfurled his wings in time to take to the air once again.

Snarling in rage, the arcanaloth struck Val with a finger of death spell; the magic ripped apart her wild shape and wracked her elven form with pain. She survived - not by a particularly large margin, but she survived.

Frustrated by his grounded location, Grey cast forth another blood curse: the anxious. The arcanaloth was visibly afflicted by it as the spectral wolves faded away, and the unthinking parts of its mind grew fearful. Grey tried to intimidate the fiend into submission, but its rage at Val had not yet been dissolved by the rapidly-onsetting anxiety.

The fallen chain devil closed ranks with OneShoe and struck her with its spiked chains, now wrapping her up in their cage. The sibriex sent out another psychic request for freedom, and OneShoe responded to the chain devil by ensnaring it right back with her rope of entanglement.

Val cast another blight spell at the arcanaloth, but this time the jackal-fiend counterspelled her magic. Bracing for the brunt of another powerful spell, she wild shaped into a cave bear. The arcanaloth, however, licked its chops nervously and surveyed the battlefield, then used dimension door to teleport itself 500 feet away.

Still atop the scaffolding, Horns also wild shaped into a cave bear and engaged in some back-and-forth combat with the chain devil across the platforms. He emerged the victor, and the devil was reduced to a rain of liquid sulfur. Meanwhile, Bear-Val closed in on the devil locked in mutual bondage with OneShoe. The distant arcanaloth disappeared from view as though by invisibility, and Grey laid a menacing hand on the remaining (entangled) devil’s shoulder and told it to release OneShoe. The devil said it would release her if she released him, and after a few tense moments, the two of them dissolved their respective holds.

The chain devil began to flee and OneShoe sank one more vengeful arrow into it as it ran. Horns caught up with it and bargained with it, compelling it to strike a deal with him: the devil would be spared as long as it told nobody of the events that transpired here today for as long as it lived. The devil agreed, and this time was allowed to flee the scene.

Val reentered conversation with the sibriex and asked about the rods' location again. It told her that the rods were stashed away in a wrecked flying fortress, and then entreated her to uphold her end of the bargain and free it. Instead, Val tried to pull more information from the sibriex, realizing that while it told her the location of the rods, it had not given her the location of the fortress. It clammed up and demanded its freedom, stating that it had given Val what she asked for and if she wanted anything else from it, she would have to free it first. Val said that if the sibriex gave her the additional information she asked for, she would free it after they had retrieved the rods. The sibriex pointed out that Val had already reneged on their deal, and it had no reason to trust that she wouldn’t do it again. It refused to tell her anything new, and Val refused to treat with the demon any more. She figured that they had other means of discovering the location of the wrecked fortress and walked back to the Anti-Chrysler. OneShoe followed, and only Horns and Grey remained with the sibriex.

The sibriex entreated the two remaining members once more for its freedom, promising the location of the wreck as well as anything else they would want to ask it. Horns saw immense value in the vast amounts of information that the demon contained, and (still in bear form) began to work at freeing the demon’s chains. Grey (still in hybrid form) leapt immediately to stop Horns, and the sibriex told Horns that, if Horns wished, it could help prevent Grey from interfering. Then they could have a proper conversation, and it would tell Horns anything he wanted to know.

Horns agreed, and the sibriex assaulted Grey with a feeblemind spell. Grey’s mental faculties were abraded to nearly nothing. He had been reduced to a furious beast, unable to think clearly, cognizant only of two things: he was in pain, and the creature in front of him wasn’t friendly.

« a curse, a kiss; gifts from the abyss
for whom Bel tolls »
comments powered by Disqus