The Menagerie took some time to sort their shit out and figure out what they wanted to do and how they wanted to proceed now that the group was feeling like themselves again. They couldn’t be certain whether they were actually following OneShoe’s tracks or whether they were just ascribing meaning to disparate Avernian features. They resolved to drive in whatever direction seemed best while thinking about OneShoe, hoping that the same psychic entreaties they’ve used in the past to navigate Avernian landmarks would work in the same way to lead them to their companion.

The camera zoomed out on the Anti-Chrysler, far enough that the vehicle disappeared from view, then moved across the landscape and zoomed back in on the dust trail of another vehicle - a devil’s ride crewed by OneShoe and Lulu.

OneShoe had also taken some time beneath a rocky outcropping for a long rest of her own, then continued on her trek back towards Fort Knucklebones to deliver Lulu safely back to Mad Maggie. She power-slid to a stop outside of the gate, still held by a complement of redcaps and madcaps, and in the course of saying goodbye to the hollyphant OneShoe realized that an unfamiliar warmth was coming from her pocket.

She withdrew the business card that Cassandra Belacourt - drow agent of the Reclamation - had left her before departing for the Material Plane with the unicorn Mooncolor and the bag of devouring, and found it to be outlined and glowing with a white-golden light, and newly adorned with a pulsing, shining rectangle emblazoned with the text, “Press To Answer.”

OneShoe pressed the rectangle, and a ghostly display of Cassandra sprang forth from the face of the card. Cassandra greeted OneShoe, apologizing for not having said that the business card could be a point of contact in a manner similar to a set of sending stones. She made a bit of idle conversation for a moment, then explained that she was successful in returning Mooncolor home and was now resting up in Mount Celestia. She said that Mooncolor actually was the impetus for the conversation, and after some off-screen difficulty in figuring out how to arrange the card so that Mooncolor could talk into it (Cassandra ended up just holding it), the unicorn’s image shimmered into view.

Mooncolor was glad to see OneShoe, and was happy to report that her recovery had been going well now that she was freed from Avernus and back at home. She apologized for not having been able to do more when the group freed her from the Demon Zapper, and asked if there was anything that she could do now that her strength was returning to her. OneShoe actually had an answer, having spent some time reflecting on the various types of deals and bargains and bonds that could be struck. She explained how she wished that she were more capable, and asked if Mooncolor would be able to help her better defend and guide her friends; to help her be a better force for good. Mooncolor found OneShoe’s heart to be agreeable, and offered to make a pact. OneShoe agreed, placed the card against her forehead as instructed, and felt a painless spike of warm energy lance into her head. Her warped aberrations were gently dissolved away, and tattoos in the form of swirling golden waves curclicued into existence along her forearms.

OneShoe thanked the unicorn and bade her farewell, then put the card back in her pocket. She revved the devil’s ride, spun it around, drove off, and come back for a second power slide as a goodbye to Lulu. She whipped a pair of golden mirror-finished aviators into her hand, snapped them upon her face, and peeled out back into the wastes in search of her companions.

At length, the Menagerie reunited once more, and took a bit of time to investigate the changes apparent in OneShoe and also to decide their next move. OneShoe spent a good portion of the conversation ragging on her friends more than she ever had before while loudly proclaiming that she’s turned over a new leaf and firing off rainbow comets of eldritch blast. But soon the group turned their attention to the common goal of trying to reach the wrecked flying fortress; a handful of hours later, the broken hulk of a black metal structure loomed upon the horizon, smashed and driven into an expanse of ruptured ground. Holes and broken windows pockmarked the rusted, blade-like structure’s hull, and the steel monstrosity listed some twenty degrees to the side. A flock of vrocks could be seen circling above the 100-foot rise of the abandoned tower. 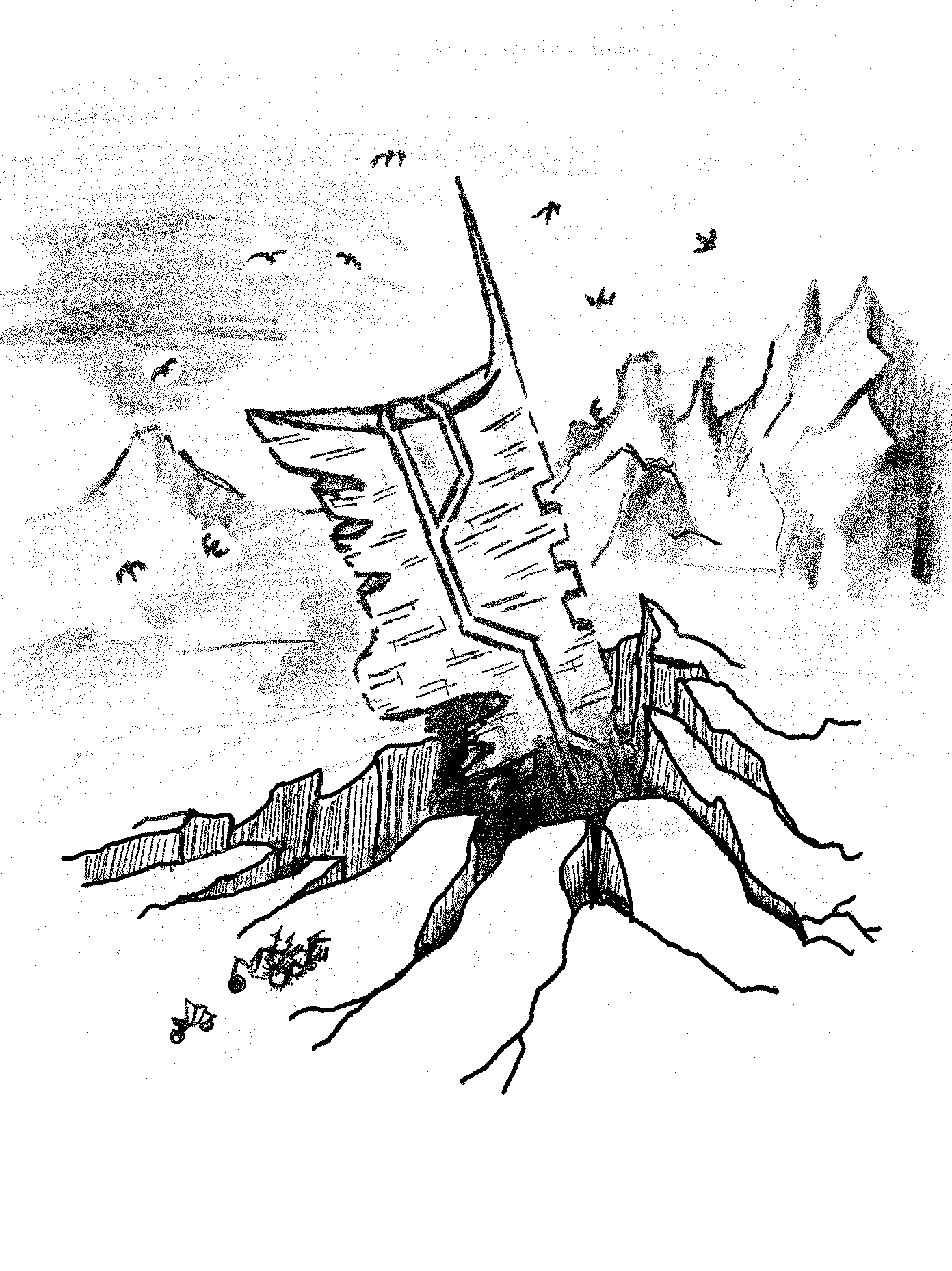 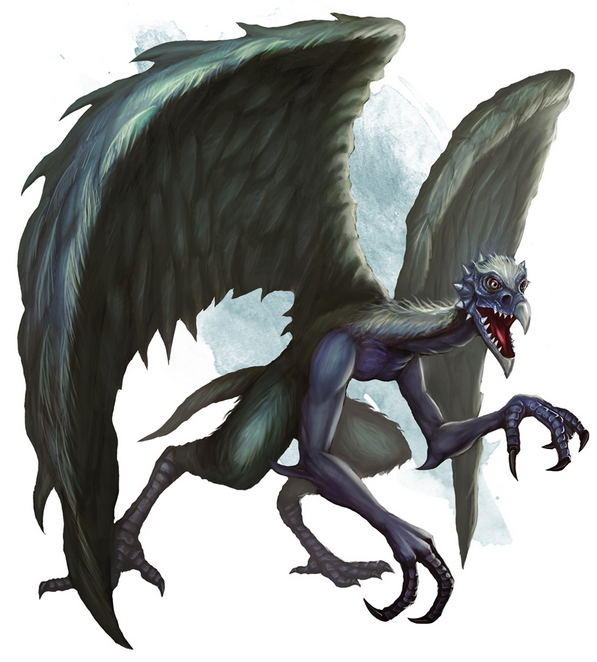 The group briefly debated attempting some sort of subtle approach, then almost immediately floored it. As expected, the vrocks swooped down when they noticed the party, and battle commenced. Some tried to disperse clouds of toxic spores among the Menagerie, but with Zed’s ancient aura, they failed to take root. Most of the rest took a more conventional beak-and-talons approach, with varying degrees of success. Through a combination of riding upon the back of an armored, upside-down Bullwinkle, taking thereby-inverted cover within the helm, and his own defenses, Zed proved himself nearly impossible to harm, though several of the rest of the Menagerie were found to be considerably more squishy.

Horns wild shaped into another giant gorilla, splitting his time between scooping up and hurling chunks of detritus from the ground and laying about with his giant fists perched on top of the demon grinder. Val brought forth the awesome and unpredictable power of the wand of wonder and again managed to blind her allies. OneShoe in particular had a rough time, operating the wrecking ball at the back of the Anti-Chrysler while bright, painful stars obscured her vision. She was a profound source of anxiety as she swung the massive wrecking ball back and forth at what she hoped were enemies (who were engaged in very close combat with her friends), and despite several very close calls, she successfully avoided demolishing the bodies of her allies while smashing a few vrocks to greasy, feathery paste.

Val transitioned away from brandishing the wand of wonder and into attacking with a summoned flock of giant owls paired with shots from Soliyandar. Zed and Bullwinkle comboed breath weapon and “Lancelot” attacks, and Finn and Grey took up positions at the front of the demon grinder. Grey swept out with the snicker-snack of his starmetal scimitar, and a magic-rage-armored Finn waited for the opportunity to catch vrocks with the Anti-Chrysler’s chomper. She was successful, and her first chomp down upon one of the vulture-like creatures snapped and crushed and clamped the creature’s leg; the followup maneuver forced the vrock down into the demon grinder’s gullet, and moments later a bloody, ichoric, chunky spray was ejected out of the pipes on either side of the vehicle.

As their numbers dwindled, the remaining vrocks attempted to flee. Zed cranked the steering column to the side and locked it into place so the Anti-Chrysler wouldn’t slam full-tilt into the wrecked fortress, then took off astride Bullwinkle to hunt down the final straggler.

As the excitement died down, the Menagerie drove closer towards the fortress and began to consider how they wanted to investigate the rusted hulk. Hot, humid air charged with a latent static-electricity sort of energy whipped and screamed through the adandoned metal husk, and dark, heavy clouds roiled angrily overhead.